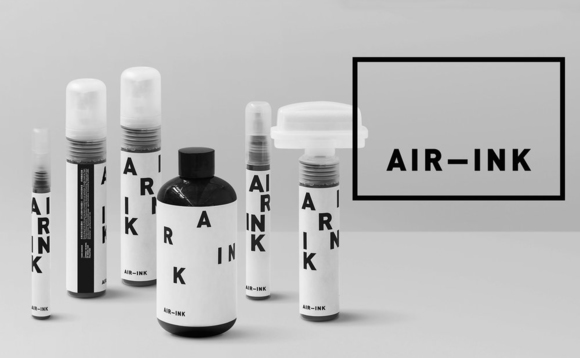 The world’s first ink made with a pigment captured from air pollution has gone on sale this week, in the latest demonstration of the creative solutions artists and designers are employing to clean-up pollution hotspots around the world.

Created by a team of scientists at Graviky Labs, a spin-off from MIT Media Labs, India-based AIR-INK produces ink made from unburned carbon soot collected from the exhaust pipes of cars, chimneys and generators in Bangalore, India. The soot is captured using a special device called the KAALINK, which fits on the end of exhausts to collect up to 93 per cent of the outgoing pollutants.

It takes 45 minutes of car emissions captured by Graviky Labs’ specially designed device to make 30ml of AIR-INK, enough to fill one pen. Pens, ink bottles and products decorated with AIR-INK designs are available to buy now on Graviky Lab’s Kickstarter page, which aims to raise $14,000 to help the team scale production of the ink and refine its capture device.

By continuing to use the site, you agree to the use of cookies. more information